Showing posts from February, 2013
Show all

Yesterday evening, around 8pm, three door-to-door Energy salesmen were knocking on doors on California Ave.  It was late and dark outside.  Residents were suspicious of what they were doing and called the cops.  Windsor Police showed up within minutes and after approximately 30 minutes they directed the salesmen to leave the neighbourhood and off they went.

If you experience this in your neighbourhood, immediately call the police and report it.  According to Windsor Police there has been a lot of suspicious "Energy Salespeople" as of late roaming the streets.

After my post yesterday, a few residents have emailed me sharing stories of recent car break-ins in their neighbourhood around Windsor Regional and Mic Mac Park.  If you could provide any additional useful information or have a story to share, please contact Windsor Police and feel free to share it on the blog as well.  Here they are below:

"Hi Fabio - I live near Windsor Western and the neighbourhood watch would be great.  Someone rifled through my car a couple of weeks ago - nothing was stolen but I have lived there for 41 years and have always felt comfortable leaving my car unlocked.  I would be interested in helping and will watch for more information."

"Hi Fabio, thanks for the update.  I would like to let you know that last night someone was casing cars on Vaughan Road.  I noticed foot prints in the snow this morning up to my vehicle but thank god it was locked.  Unfortunately one of my neighbors forgot to lock her car and they went through it and the trun…
Post a Comment
Read more 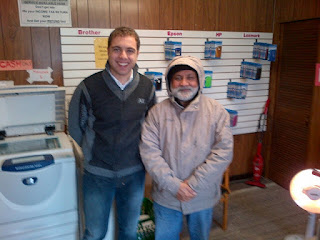 As you may know, Atkinson Pool will no longer be an item for discussion at City Council.  This is great news.

Several residents have contacted me regarding South Tilston Park.  It has been decided by many that a public meeting at this time will not be beneficial.  I have been working diligently on this issue and have had several discussions with our Councillor and others about this as well.  Please do not hesitate to get in touch should you have any questions or concerns.  It is our hope that South Tilston receives the same good news as Atkinson Pool did recently.

I have just found out some very positive news today regarding an initiative that I have been working on for several years in the west-end.  There will be a public press conference regarding this great news in the near future.  Until then, I cannot say much, other then the fact that this positive development will play a leading role in making the west-e…
Post a Comment
Read more

As you may already know, South Tilston park is up for disposition.  A meeting was recently scheduled with City Administration and there will be another one that will follow shortly.  I will keep you posted on that.

As someone who grew up in the Bridgeview area, I know personally how important these parks are not just for young folks, but for seniors and families.

Please stay in touch as I will provide more information regarding next steps.

If you click on the link below, you can hear my interview with Tony Doucette of CBC Radio and also the Parks Manager's perspective on this issue.

For those who may have missed it, below is my article on Windsor West Little League and the positive impact it has had for kids in the west-end.

A big thank you to Yvette Temple and Jennifer Jones, both tireless volunteers who have dedicated many hours, along with the other board members and volunteers, in making WWLL a great organization.  Both Yvette and Jennifer had coffee with me as we discussed the history of the league as well as its current state and its future.  Here it is:

February 02, 2013
Friends,
Below is an email I received regarding a meeting this Wednesday on the future of South Tilston Park.  For those of you who may not know, the park is located in the Bridgeview neighbourhood.  I hope you can make it out to the meeting.  I will be there.
"Fabio:
Letting you know about the City meeting on Wednesday, February 6 from 6 - 8 p.m. at College Ave. Community Centre as to:
"Future of South Tilston Park.  This .64 acre pocket-sized park is located on Tilston Drive east of Rankin Avenue.  The City, in keeping with its Official Plan requirements is inviting the public to discuss the proposed disposal of the park and consolidation of park amenities in neighbouring parks"
This was posted as a public notice in the Star on Saturday.
Source:  West-End Resident
Post a Comment
Read more
More posts